Any ideas, thoughts - not necessary related to Hard Disk Sentinel.
Post a reply
5 posts • Page 1 of 1


I am just starting to check out and look into Hard Disk Sentinel for the first time.
For a long time I have of coursed used and played with other free tools in Windows and Linux.
Mostly in Windows as this is what most of my customers are using.

Over the years I have always been able to very easily in windows gather monitor and collect all of the information
on SATA drives that I needed to know what was going on with the drives.

SAS has been a totally different story. and I do not understand why.
You would think (I would think anyway) that on "enterprise class drives" that this same type of information should be as or more
readily accessible on SAS drives as it is on SATA drives but it very much is not.
All of the raid controller bioses and Windows based RAID management software does not give me much of a view into any information on SAS drives
other than pretty much a pass/fail go/nogo status.
From those tools I have never been able to see things like how many hours the drive has been powered up, run SMART tests and things like that.
Why is this?

More recently I have discovered that I can run smartmontools in linux wit the same exact RAID controllers that I have always used in Windows and get MUCH MORE and complete
information on most SAS drives I have tested.
Over 10 years I have casually looked and searched on the Internet for how to get information from SAS drives like you can with SATA and I have never really found much good information on it.
Doesn't seem that very many people have asked or complained about it.
I found out quite by accident just by trying it out in Linux very recently that I can get some useful SMART data on SAS drives.

I've asked sellers of SAS drives and Raid hardware over the years about this and never got any solid answers other than that they thought the information simply was not available on SAS drives that I was looking for.
I even asked on the FREENAS Forum a couple years ago and got a similar type of response.
I've found other people asking on forums and not getting answers.

Anyhow I'm eventually getting to two points here.
I'm wondering if anyone else here has experience with SAS drives and getting good SMART data from them? Or hav eyou experienced pretty much the same thing I have?

My second question is to ask if Hard Disk Sentinel has any 'visibility' into SAS drives on RAID controllers that is better than all of the manufacture provided windows utilities and RAID bios utilities that I have experienced
to give not much more than a PASS/FAIL indication of SAS drive health?

Excuse me, but it seems you may missed that Hard Disk Sentinel already supports SAS hard disks (and SCSI hard disks) for over 10 years.
Hard Disk Sentinel can properly detect, collect and display _complete_ self-monitoring S.M.A.R.T. information, including temperature, health, lifetime status, statistics about SAS hard disks too. Plus even wearout and further details of SAS SSDs too.

Hard Disk Sentinel is able to run hard disk tests generally on SAS drives (may be limited by some controllers, but generally this is possible with no problems).
Hard Disk Sentinel can do this with both standalone non-RAID configuration (using SAS HBAs) and also in SAS RAID configurations too with most SAS RAID controllers eg. with Adaptec, Intel, LSI, IBM, Lenovo, Dell, HighPoint, Areca, ATTO, Promise, 3ware....

I wonder why/how it missed if you were looking for disk monitoring / diagnosing software - as the above all are possible by Hard Disk Sentinel for many years.

I thought this is well documented, for example on the following locations:


2) If you look the updates of generally ANY version of Hard Disk Sentinel, you can notice that at least one SAS RAID controller mentioned with updates.
For example the latest version:


3) I can also mention the system requirements page

which describes that SAS drives are also supported.


Alternatively if you're are looking for Linux, then why did not check the Linux page:

which also supports SAS drives generally (not in all RAID configurations, but generally with HBAs should be fine)


Excuse me, I do not really know what/where you were looking, but I'm afraid those were WRONG places - as everything you wrote are ALL included in Hard Disk Sentinel for very long time.
I'm even more shocked that nobody you asked found any of the above information yet in years ?

Images about SAS drives, their complete self-monitoring data and how they appear on the Information page (this one is managed by LSI SAS RAID controller): 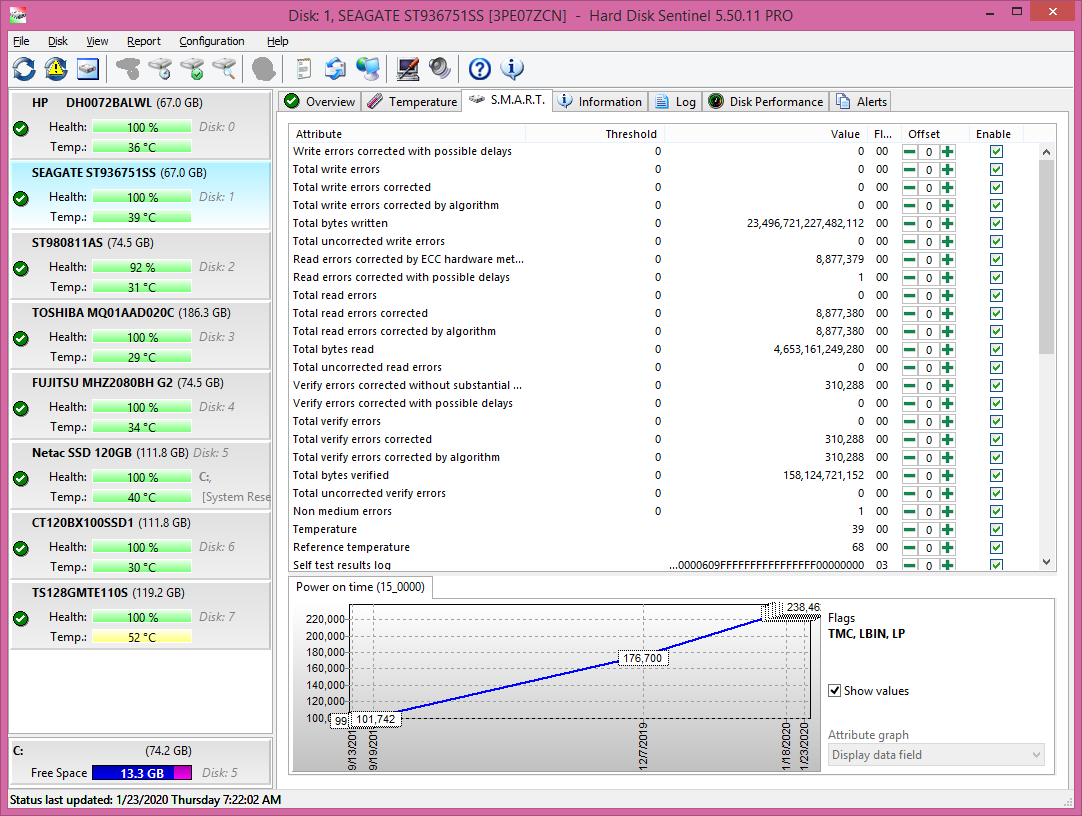 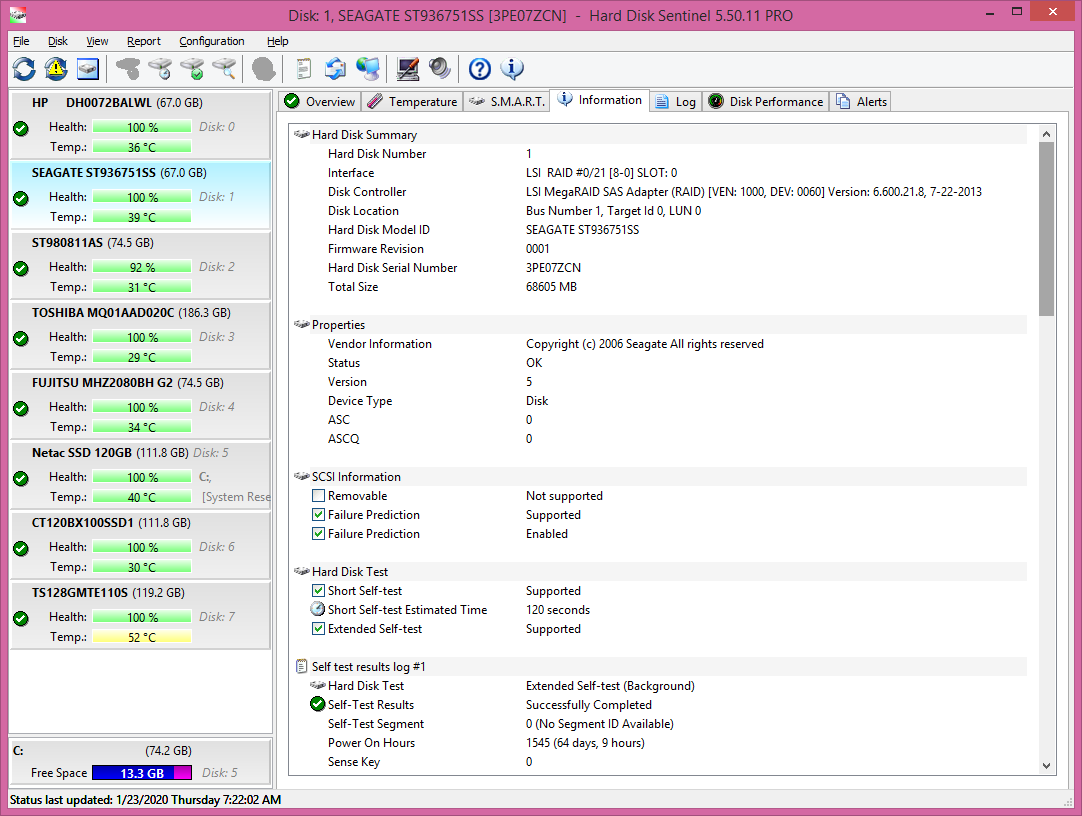 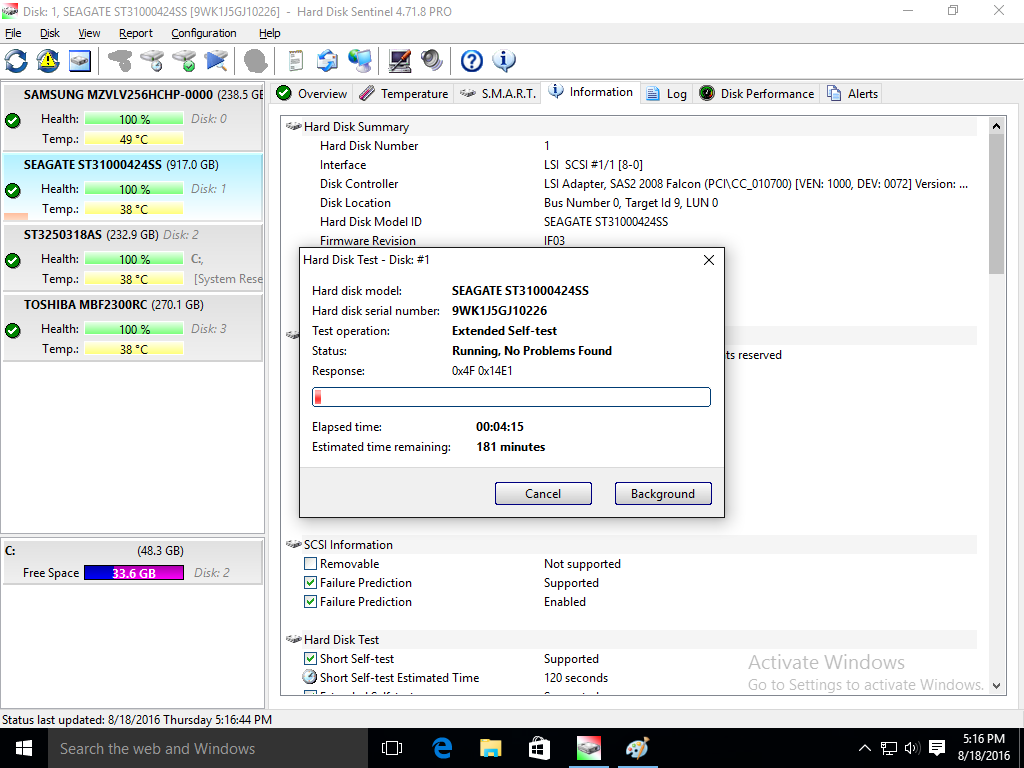 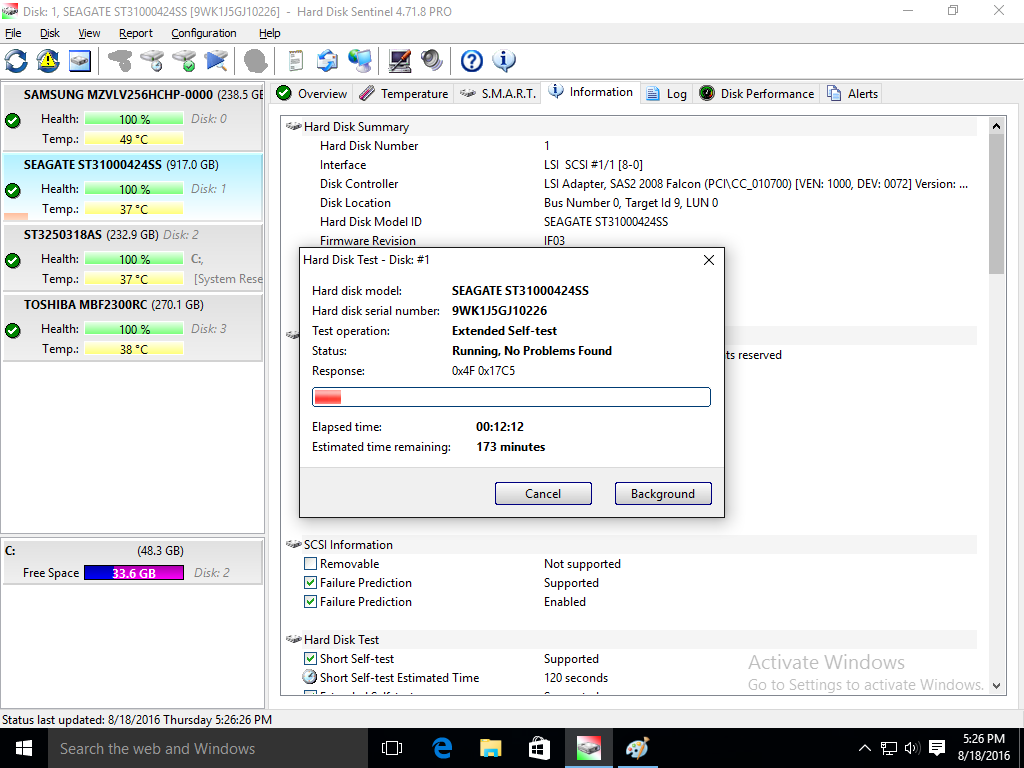 Thanks for the information.

I have *casually* looked and asked over the past several years about this on the Internet.
And nobody has ever recommended or pointed me to Hard Disk Sentinel.
I am now checking it out.

My questions over the years are why was this information NOT available via the management software that comes with the the RAID controllers and in the RAID bios menus.

I think you may have misunderstood this.

Sorry, but I do not really know why manufacturers did not add such function to their tools / RAID BIOS menu. Maybe worth sending this question to manufactures

Not sure if they want to HIDE all details - or just want to prevent support questions like "what does xy value mean", "should I worry about this number" or so....

No, I understood correctly that you were looking for a solution to check / monitor SMART status of SAS drives. So I wanted to point on that generally checking the S.M.A.R.T. data of SAS drives is possible (even RAID configurations) regardless of manufacturers in a standard way by Hard Disk Sentinel. The only thing I did not understand (and shocked) how it may be missed - as it is possible for many years...

Generally even if checking from BIOS / boot time would be possible, it would be not too useful.

Without real time (constant) monitoring, you may miss several events, for example
- you may not notice WHEN exactly a disk drive reported problems, when the health degraded (which you may connect to some events, eg. a storm, causing power loss / power fluctuation or so)