There are weak sectors found on the hard disk surface.

This example shows the status of a Seagate 250 GB SATA hard disk.

Initially, the hard disk health reported was 81 %. The text description shows the actual problems with the hard disk:

The Disk -> Short self test and Disk -> Extended self test functions quickly stop with an error indicating that there is a problem: 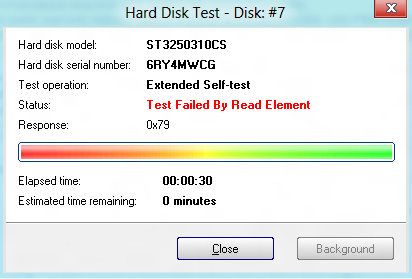 Using chkdsk to "repair" the bad sectors also confirm that there is a problem with the partition (notice the 13928 KB in bad sectors): 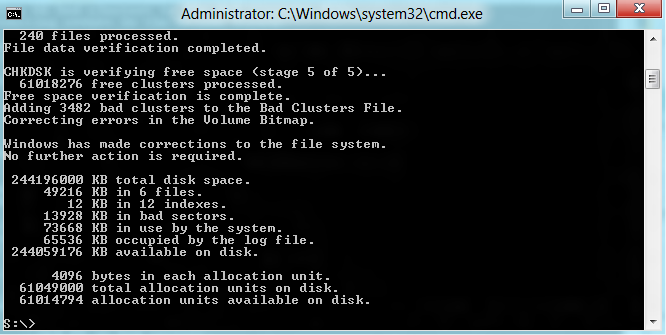 A "weak sector" or "pending sector" (the same but with different name) is a sector where the CRC check showed problems on a read operation, but (currently) no physical problem encountered. The drive marks such sector as "pending sector" and on next write operation(s) the drive verifies the status of the corresponding sector to confirm if it can be re-used or not.

If things are good, the drive sector could read back and there are no signs of problems, then the status of the sector set back to normal (the number of such weak sectors may decrease and there is no re-allocation). But if this verification shows failure, then the drive starts the reallocation process and marks the sector as bad - to completely disable its later use and re-direct all further reads and writes to the spare area instead. Then the number of bad (reallocated) sectors may incrase and they may be reported in Hard Disk Sentinel.

Usually, weak sectors can be caused by

Because weak sectors may not indicate real failure of the hard disk drive, they are not counted as seriously as real bad sectors or other attributes / issues. Anyway, these should be noticed also because they can cause serious problems if they are located in the administrative areas of the hard disk drive (boot record, MFT, critical system files) and/or if the number of weak sectors is high.

This may sound weird, but in most cases the weak sectors do not indicate real problems with the hard disk. As a side effect, chkdsk may detect bad sectors on the actual partition (logical drive) and marks them as bad to prevent accessing that particular logical drive area. However, this is not the best solution because chkdsk does not repair the hard disk drive itself, only the partition (the logical drive). It means that if a re-partition and re-format would be ever required, the problems are still there, the problematic sectors would be used again, they may cause data loss / corruption again and re-running chkdsk may find them again - a vicious circle.

When weak sectors reported by Hard Disk Sentinel, the first thing to be considered that the problem may not be the failure of the hard disk itself, but a problem caused by the operating environment. It is recommended to check the items listed above, replace data / power cables, verify the power supply. If this does not happen, we may expect further weak sectors to be detected during the later use of the hard disk. For example, if the status is not stable, performing even an antivirus scan or using Disk -> Read Test function may reveal further "weak sectors" on the hard disk surface. Notice that the number of red spots (unreadable sectors, showing the position of the weak sectors) are higher than the previously reported weak sectors: 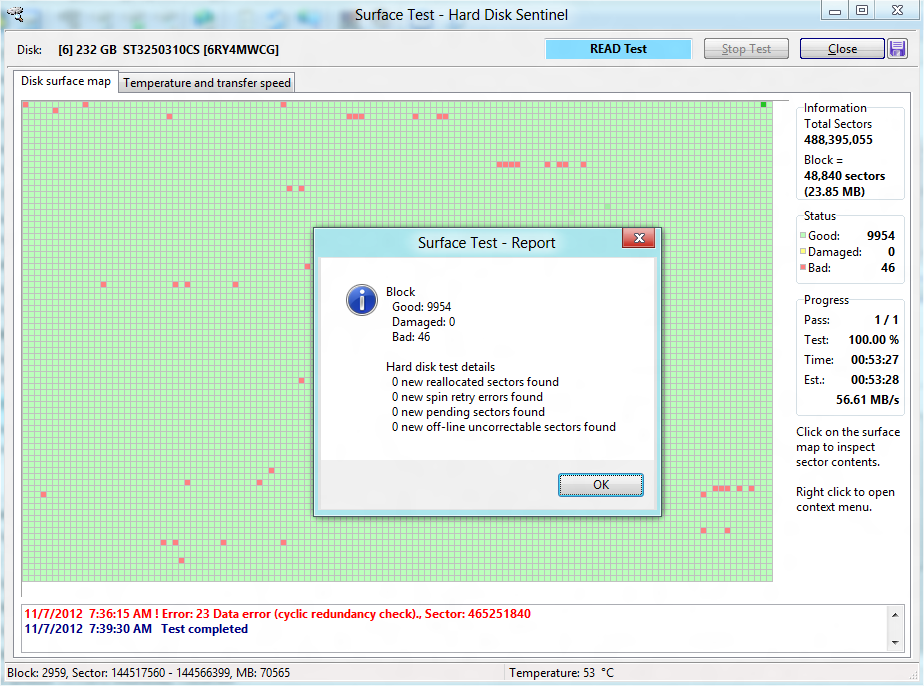 To completely repair weak sectors, it is required to perform the overwrite of the disk surface. This would ensure that the currently reported and all possible new (currently not detected) weak sectors would be carefully re-tested and the hard disk can perform the required steps: to reallocate the sector (if it can't be re-used and required to replace with a spare sector) or to repair it if the sector can be re-used without problems. The best way is to perform the overwrite with special initialisation patterns to help the hard disk to perform the verification of the underlying weak sectors and test if the sector is usable and works accurately after different overwrite passes and then could be read back without problems.

After using Disk menu -> Surface test -> Reinitialise disk surface test, the hard disk status will be stable and the complete surface can be used without problems. Ideally, absolutely no reallocation required: the hard disk may return to PERFECT status and 100% health would be reported again:

Re-running the Disk -> Extended self-test function confirms that now there are no problems: 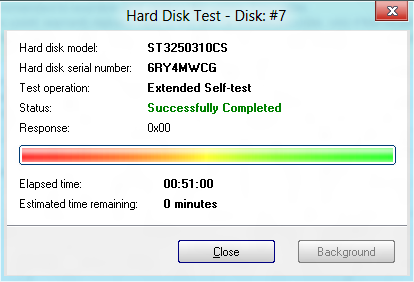 Re-running the Disk -> Surface test -> Read test function also confirms that the disk surface is now perfect, there are no damaged or bad blocks found: 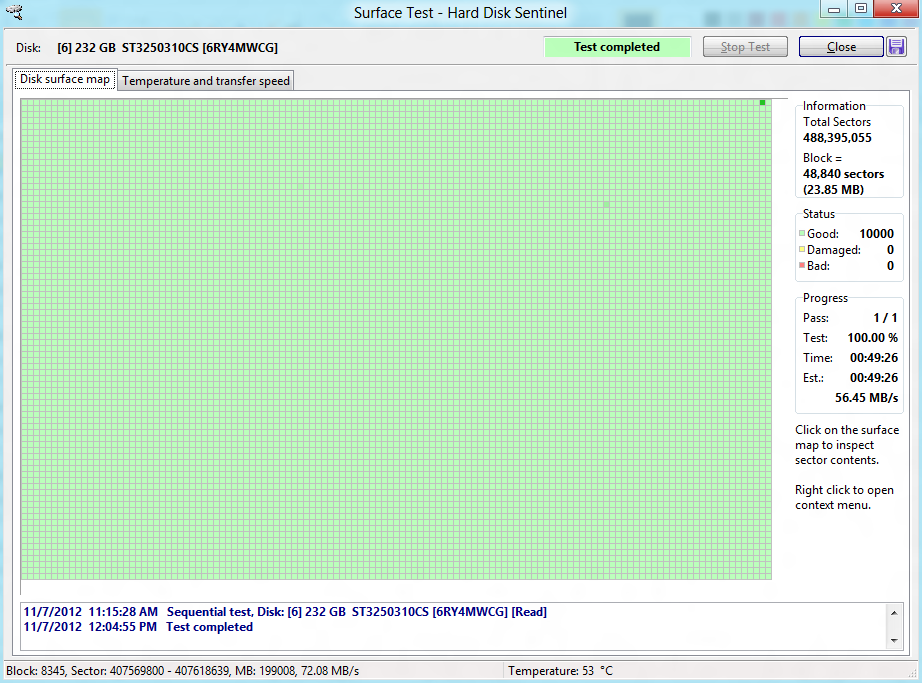 And even the performance graph shows that the complete hard disk surface is correctly accessible, without any significant delays: 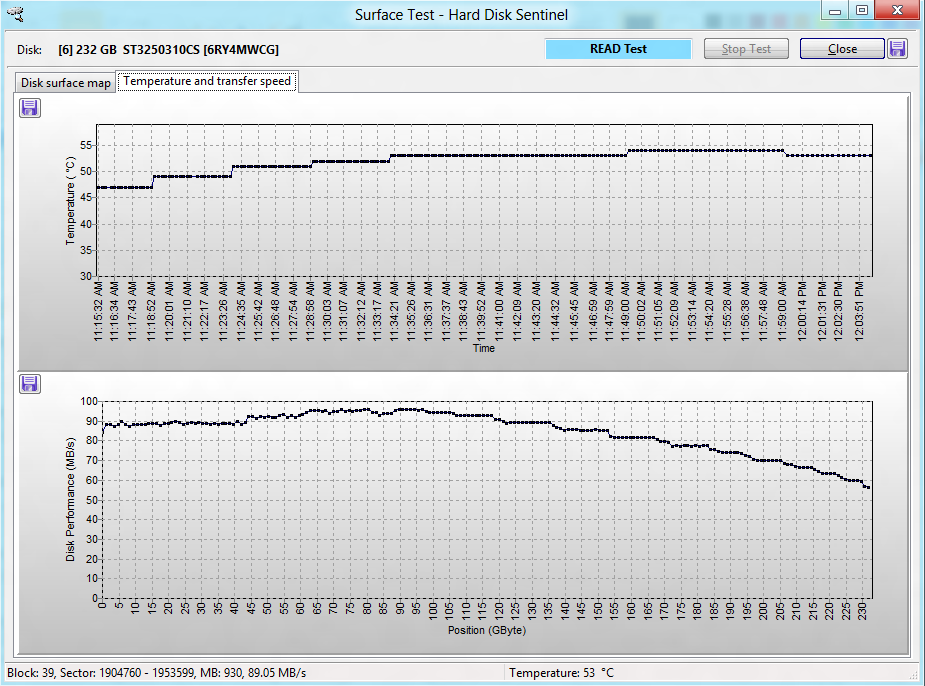 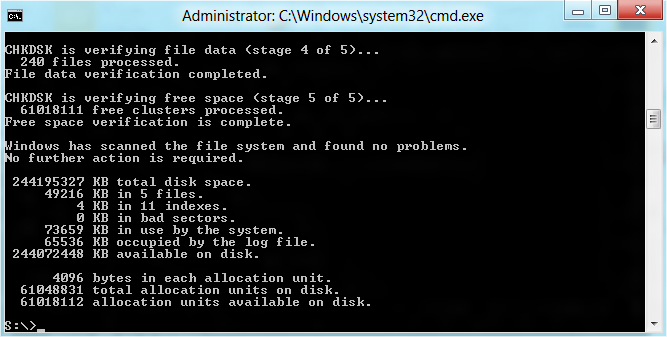 Hard Disk Sentinel Pro since 5.00 version has a new function designed exactly to repair such weak sectors on any disk drive (hard disks, SSDs, flash media and so) without the need of complete backup and without performing disk erase. The new Disk menu -> Surface test -> Disk repair test designed to diagnose and attempt to repair easier by performing a read test - and attempting the repair specifically on the affected sectors found problematic during this test. After the test, possible damaged files (located on the original problematic, damaged sectors) listed for reference.

Ideally Disk menu -> Surface test -> Disk repair test can help to repair drive completely, especially if the number of problems are relatively low and the hard disk is stable otherwise. In case of bigger problems and/or if weak sectors still reported, it is recommended to perform the above check-list (verify cables, connections, power source etc. and then re-run the Disk repair function) and if required, consider using the Reinitialise disk surface test too.