Hard Disk Sentinel Professional 6.00 version introduced a new test: Disk menu Surface test -> Quick Fix. The purpose of the Quick Fix test is to (as described in the software when the appropriate test function selected):

Verify which area(s) of the disk drive reported problems and written recently then diagnose, repair specifically those (and nearby) sectors and critical system areas. The test forces the disk drive to repair any problematic (pending, weak) sectors: restore the status to good or reallocate (replace from spare area) if required to prevent further use of the original sector.

Unlike a complete scan, this test may not able to find and correct all possible problems, so best used on disk drives with relatively low number of problems and high Health value reported to repair weak sector(s) without the need of complete backup (and use of the Reinitialize disk surface test).

The test can be used on both system and secondary drives and it is safe for stored data. Possible damaged files will be readable, however file fragment(s) on damaged sectors may be corrupted. File(s) on the affected repaired sectors are listed when the test completed.

The Quick Fix test first determines which areas of the disk drive should be tested at all: which sectors could be damaged and may require repairing. Ideally, when the Overview page of Hard Disk Sentinel shows a new problem (for example one or more new weak sectors appear on the drive) this test can quickly determine the actual location and specifically test, diagnose and repair them - without performing a complete scan of the disk surface (as the Disk Repair test would do).

The following sectors and their "neighborhood" (the complete block, so 1/10000 of the complete disk capacity around the appropriate sector) are examined, verified (and if required repaired) during the Quick Fix test:

Depending on the disk capacity and the actual situation (number and type of partitions defined, number and size of recently modified files) the test can perform targeted disk repairing on about 1-2 % of the complete disk drive surface. Generally the repair function itself is same as the Disk Repair test of Hard Disk Sentinel Professional, the only exception is that the Quick Fix performs testing specifically on sectors which probably damaged recently, so it may finish in some minutes - without the need to run for several hours.

In addition to testing and repairing specifically the sectors, the Quick Fix test has an automatic feature: if one or more sectors need repairing, the test automatically starts again in a 2nd (and further) pass, up to 5 passes. The goal is to reveal and stabilize all possible sectors and have an error-free pass, when all of the suspicious sectors could be read without errors, retries or huge delays. In some cases (especially if the drive is far from perfect) new and new sectors can become weak/pending - so a 2nd and further pass may able to fix, stabilize these too. Ideally after all sectors repaired, the following pass should be completed without new problems which confrm that the status is stable, fixed (at least for the tested area of the disk drive).

After the test completed, the Quick Fix test shows the results - and (depending on the success and the current status of the drive) can recommend other tests (typically the Disk menu Surface test -> Disk Repair and/or the Disk menu Surface test -> Reinitialise Disk Surface) as they may able to stabilize weak/pending sectors and further issues and improve the usability - just they require longer time. 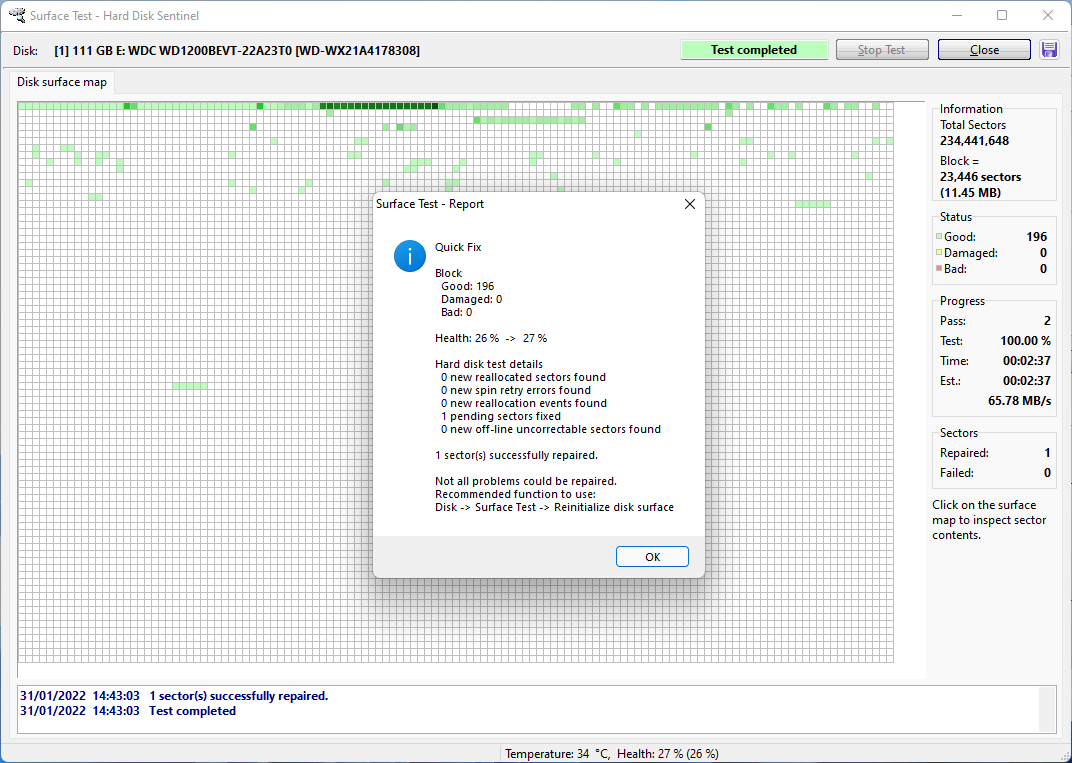 Quick fix of a weak/pending sector on a hard disk drive. 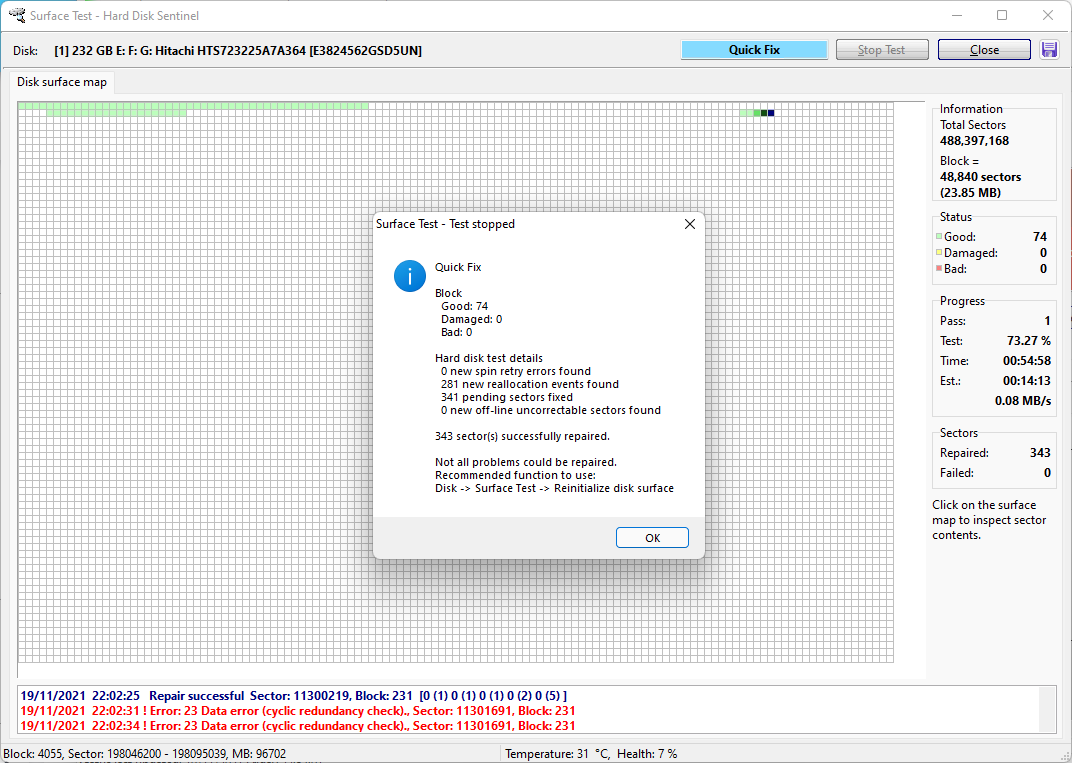